Just under 3 years and 17 months old. Those were the ages of my first two children on the day we broke ground. It took almost a year to complete our custom home out in the country. Living in the caretaker’s cottage at the front of the property gave us full view and access to all the excitement. Mud, sweat and a few meltdowns later, I learned a few things to help keep the littles occupied and happy during the process.

Let them explore! Whether it’s a remodel or a new build, there are going to be all sorts of new things for the kids to get into. We lucked out and had excavators, bulldozers and cement trucks. When the crew left for the day, we let the kids touch and climb just about everything. They were mesmerized–and dirty. But their new adventure is well worth the extra baby wipes.

They’re going to get messy, and that’s okay! I invested in some muck boots for the kids. Construction sites aren’t just muddy, but they are full of nails, cigarette butts and trash. Keep their toes safe and minimize the mess with some good boots. And, you may want to pack some extra clothes too.

Get them involved. My two loved putting “markers” in the ground. We grabbed extra stakes when we walked the property and let the kids mark their territory. A few other items in their kiddy tool box included hard hats, flashlights, garden shovels and tape measures. It made them feel they were part of the process, which allowed us to maintain a conversation with contractors and ourselves. 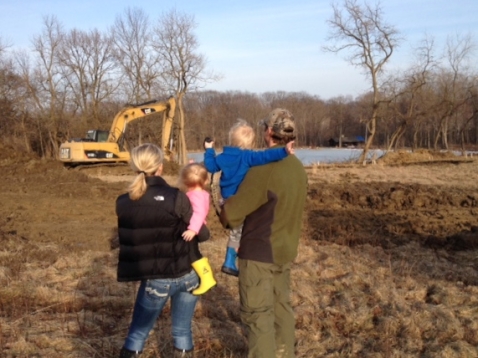 Don’t lose perspective. We lived in a 1.5 bedroom, 800-square-foot cottage for more than two years during the design and build phases. To us, it was insanely tight. To the kids, it was home. When one of us wanted to lose it, we reminded each other of two things: we were building our dream home, and we wanted it done right. So simple, yet so critical.

Four easy steps, but I’m sure there are more. What did you take to heart during your big project?