Seventeen. I had to rest my spoon on the side of the Nutella jar to keep scrolling, but that’s about when I stopped counting. Seventeen posts with pics of yoga mats, clean eating plates and organized toy rooms. While I’m pleased as punch all my friends hit the ground running in 2017, my resolution is to do more of the opposite. Be messy. Move less. Eat the damn donut.

Let me be frank: I’m type-A. Even with three small kids my house–so I’m told–looks like a catalog. The toys are tucked away in matching nesting bins. Countertops are finger-print free. And the Vitamix is already washed and stored from the organic smoothie I made at exactly 8am. My life is neat, predictable and in need of a good shoulder shaking. While I’m not going to let my house or my skinny jeans go, I am going to slow down a little in 2017 and enjoy what’s right in front of me. 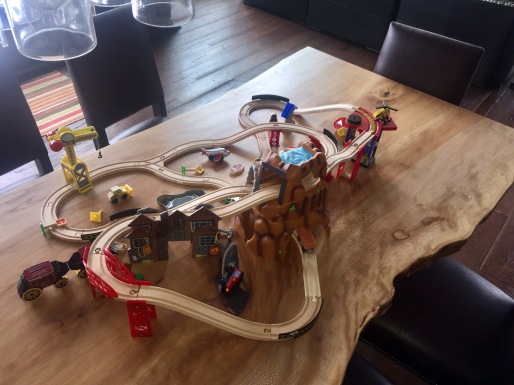 Leave the mess. ‘I wasn’t done with that.’ It’s a statement I hear at least once a day from my kids or husband as I frantically put away legos, blankets or a half-empty glass of milk sitting on the counter. I have a really (REALLY) hard time stepping over or looking at free-standing items that are out of place. There’s a two-story train set on my custom-made dining room table right now. It’s the only place my five year old can build without his baby brother tearing apart his creation. It’s been there for 11 days. With an open floor plan it’s impossible not to see it from anywhere on the main level. But last I checked the queen isn’t coming to dinner so who cares? 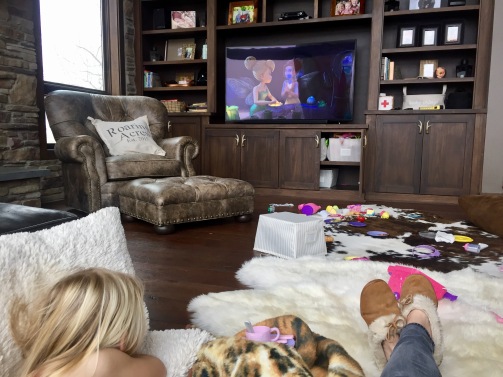 Move less. My daughter set up a late-morning tea party while I was putting her brother down for a nap. In between loading the laundry, the dishwasher and gluing a broken toy, she asked me to sit down at least three times to drink with her. While I’ve read plenty of posts about how critical it is to spend time with your kids, my to-do list speaks volumes when I enter a room and look around. So instead of heading to the kitchen or laundry room the minute my hands are free, I’m going to head to the family room where my kids are playing. Drink imaginary tea on the bean bag chair. Cuddle under a heap of blankets to watch Tinkerbell & the Pirate Fairy (again) while the snow falls outside. Focus on the ‘task’ of quality time. Just be still.

Just eat (or drink) it. My husband is a foodie. He tends to over-order because he wants to try everything on the menu. Part of the experience for him is getting other people to join in on the face-stuffing fun. Now, I’m all for trying something new but not if it’s deep fried or covered in butter. Though listening to myself talk about fat content while the kids are eating outside of their comfort zone is one thing I just can’t stomach anymore. To him, eating is never about calorie counting. It’s an adventure. Keep your mouth shut unless you’re taking a bite.

Make goals, not lists. There’s something about checking off a box on the to-do list that feels so satisfying. When things get out of control with the kids I feel good at the end of a crazy day knowing I accomplished three things that were really important to me. But news flash: it’s not about me. Not just as a mom, but as a friend, a wife, a daughter–there are far more important things for me to focus on then a shipshape figure, house and kids. I’m proud to say that a few things I ticked off my new list this week are: